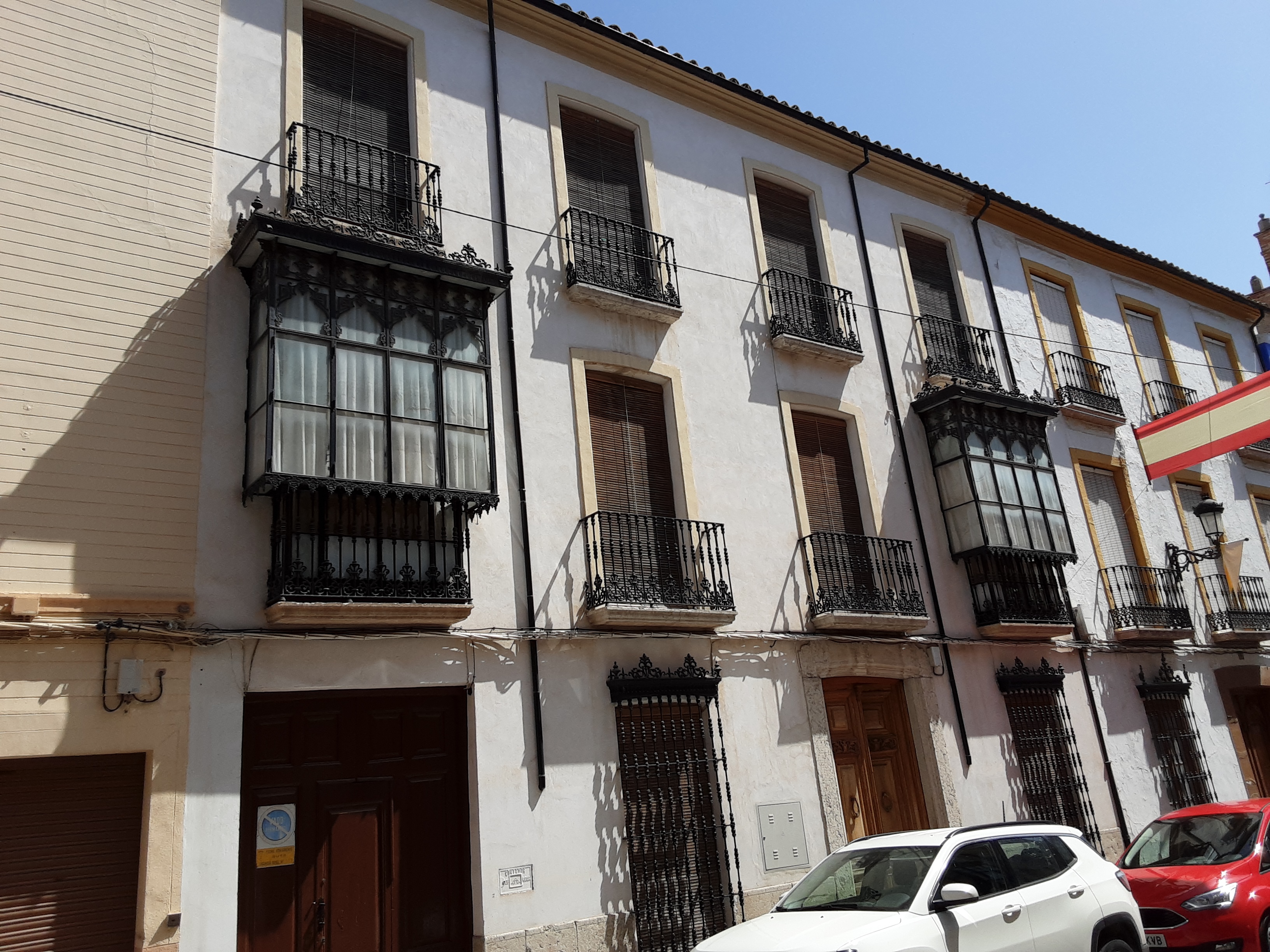 Location. – This typical Andalusian style grand house is located in Rute, next to the Town Hall. Rute is a white washed town laid on a hill in the Andalusian region of Subbética, in Cordoba province. The nearest international airport is in Málaga (100kms away/ 1 hour drive).

Description of the house: Rute’s General Urban Plan defines it as “an important house with a beautiful façade with a ground floor plus two more floors. In the first floor there are two large balconies with pretty Andalusian style iron rejas and curtains. The interest lays on the symmetry of hollows and the mentioned elements of forge (closings, balconies and salient low grilles with bars of macollas), frames, threshold, plinth, sill and marble balcony feet, as well as on the quality and style of the carpentry (main door, windows and laminated blinds of marquetry)”.

The ground floor of 410m2 includes:

A large carved wooden door introduces the house through an 8 m2 access portal, followed by a wooden door and gate with shutters that leads to a 34m2 hall; in front of this door is the access to the central courtyard, also with shutters; both doors are arch-shaped.

The main hall has on both sides two rooms: the office and a bedroom (nº 1). In this hall also stands out the wide main staircase that starts from it with beautiful handrails and ends in a landing of 8m2.

The living room (24 m2) is separated from the hall by 4 solid wood folding doors; in it there are two large windows with rejas and views of the central patio and a large door that communicates with the dining room. The dining room of 13.7 m2 has a window overlooking the central patio too. Next, are the corridor communicating with the kitchen (3.8 m2) and the access door to the patio.

The service area includes the kitchen of 20.5 m2with two windows looking onto the central patio, it is adorned with copper tools and a garnet marble sink. It has an access door to the second patio and the pantry of 11.2 m2. The service area is completed by a 2.8 m2 bathroom and a 2.3 m2 washing machine room; the service staircase to the first floor has a total of 14.64 m2

The central patio has an area of 42 m2 with accesses to the service area, the main hall and the second patio separated by a fence and communicated by three steps. The second patio of 89 m2 also includes a covered part of 20.4 m2 at the service street entrance and another part of 44.8 m2, which is below the terrace and next to the woodshed of 36.6 m2. The total area of the patios is 277 m2, of which 65 are covered.

The bedroom nº6 of 15m2 is accessed from the service staircase, with two facing balconies and two built-in wardrobes of 3 m2 each. This bedroom ha its corresponding main bathroom of 12 m2 with a wardrobe of 1m2, in good condition and with two large windows overlooking the Sierra de Araceli, as well as a dressing room of 8 m2 and  the corridor of 9 m2 that communicates with the rest of the rooms. It is in this area that you will find the staircase leading to the attic.

The second floor is made up of a large attic, which has its own unique access from the service staircase.  It is an open-plan space of 117 m2 with 6 balconies (4 to the street).

– All the doors and windows are made of solid pine wood and are in an excellent state of conservation and have not been affected by moth or other wood parasites. The whole area of portals and the stairs are covered in marble, the service area leading to the 1st floor has red ceramic tiles and wooden steps.

– The house is sold with all the furniture, with several antique pieces of high quality.

Temperature comfort: the house is heated with two wood stoves, one in the main hall and the other in the kitchen. At present the woodshed is almost full and, if the client so wishes, the supply of the woodshed is guaranteed. In the summer the house stays cool due to its thick walls; there is an Air Conditioned machine in the dining room with heat pump too. It should also be mentioned the exceptional “coolness” of the central patio.

ABOUT THE TOWN AND SUROUNDINGS

Rute is located southwest of the province of Cordoba, in what could be considered the “heart” of Andalusia and the natural park of the Sierras Subbéticas Cordobesas. The town is laid on the slope of a hill part of a range fairly high hills that takes its name and that forms part, in turn, of the southern sector of the set Horconera-Rute. Its lands are bordered to the north by the municipalities of Cabra and Carcabuey, to the south by Iznájar and Cuevas de San Marcos (Málaga), to the east by Priego de Córdoba and to the west by Lucena and Encinas Reales.

Its population is approximately 10,000 inhabitants, a figure that has remained almost constant over the last 20 years. It has  complete medical services (ambulatory) and the proximity of the Regional Hospital of Cabra 20 Kms away, road cleaning, services of attention to the citizen, police station etc. Its economy is based on farming the vast extension of olive tree states which cover the area (its olive oil has numerous recognitions in international contests) and food process non-polluting industry

It is in the geographical centre of Andalusia which allows trips of no more than 100 km by motorway to the nearby cities of Malaga, Granada, Cordoba and Jaen and 130 km to Seville.

Rute’s climate is temperate with an inland Mediterranean character, with a certain Atlantic influence. Thus, while summers are generally dry and hot (maximum temperatures are reached in July), winters are cold (minimums are recorded in January, which can even be below 0º C). Spring and autumn have mild temperatures, ranging from 10º C to 20º C.

Forming part of the mountainous area denominated Sierra de Rute y Horconera and presenting an orientation of NE-SW, it develops all its extension in the interior of the municipal term of Rute, constituting the most southern reliefs of the Cordovan subbetic.

The scenic nature of its surroundings allows for attractive itineraries through the Subbética natural park in which it is nestled, as well as organising multiple activities aimed at closer contact with nature itself:

– Hiking, horseback riding, mountain biking, water sports, climbing, paragliding…, are, among others, a sample of the wide range of possibilities offered by these places.

– A.D.E.B.O.: Association for the Defence of the Borrico, which has a reserve for this small donkey, as well as a refuge for the same protectionist purpose.

– Fuente Alta: one of the many springs that is born in the Sierra de Rute. Located inside the Subbética natural park, it is one of the best free camping areas in this municipality.

– The birth of the La Hoz river: popularly known as “Salsipuedes” due to the formation in it of large gorges with meanders in the limestone and dolomites.

– Iznájar Reservoir: ideal enclave for all kinds of activities related to the enjoyment of nature and nautical sports.

– Birth of Zambra: spring where the famous Zambra mineral water is bottled.

– Thousand-year-old oak: declared a Natural Monument by the Department of the Environment of the Junta de Andalucía, it is located in the ruteña village of Llanos de Don Juan.

– GR7: the Great Route called GR7, runs throughout the southern part of Europe, starting in Athens and ending in Algeciras.

Imagine how wonderful it would be to live in… More Details

This house located in Ventorros de Balerma, it is… More Details

You need to log in to use member only features.